It’s time to get serious about this blogging business. After attending several writer’s conferences I’ve decided to offer my experience in medicine and medical education to writers who want to double-check their medically related story events. Not the forensic stuff, I’ll leave that to Dr. D.P. Lyle. More the, someone gets hit on the head, what happens next…my patient is pregnant and I want something bad to happen to her…someone has major surgery, what do they look like after. 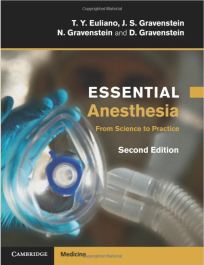 A popular introductory text of anesthesia I co-wrote with colleagues

The following examples come largely from TV, though there are plenty in book form as well. During the first season of Chicago Hope, I was a second-year anesthesia resident (in real life, not on the show). A surgeon separates conjoined twins – very dramatic I’m sure, but what I remember is they rolled the babies out of the operating room with just nasal cannulae – the little clear tube that runs under a patient’s nose and blows oxygen. Not even a little realistic. Those kids would have breathing tubes and be on ventilators likely for days at least. On another recent show there was a ventilator firing away in the background, but the patient didn’t have a breathing tube.

Problematic to me, but likely not to the general public, are programs like Grey’s Anatomy and the old E.R. that give unrealistic responsibilities to the stars, and relegate the other members of the healthcare team to supporting roles. Of course it’s most egregious when the anesthesiologist is just there to take orders from the surgeon. UGH!

A recent question I helped with – what does it take to bring a dog into a hospital. Granted the answer will differ by hospital, but I can provide information related to a major teaching institution…So, writers, bring on your medical scenarios…I am particularly knowledge about – anesthesiology, obstetrics, physiology, simulation, medical education, medical research (e.g., study design, institutional review boards, grants, patents, etc).